Ebola - A week in pictures:

West Africa was ill-equipped for an Ebola outbreak because of war and poverty, poorly developed local health systems and a lack of doctors and nurses. The region's health workers had no experience of an Ebola outbreak and didn't know what they were seeing in those first critical months. Influenza, Malaria, Typhoid and Cholera have similar presentations. In the spring the outbreak seemed to fade, making officials overconfident. And then the virus made the leap from rural villages to crowded cities.

Local customs in handling the dead spread the virus. Some West Africans believe that the day you die is one of the most important days of your life. The final farewell can be a hands-on, affectionate ritual in which the body is washed and dressed, and in some villages carried through the community, where friends and relatives will share a favourite beverage by putting the cup to the lips of the deceased before taking a drink. This exposed the mourners to the Ebola virus...

Professor Sam McConkey from the Royal College of Surgeons and Dr Graham Fry from the Tropical Medical Bureau expect at least one case of the potentially lethal virus to occur here. Chief Medical Officer with the HSE Tony Holohan said National plans for dealing with Ebola have existed since 2002 and have been put into operation, with a 12-bed isolation unit at the Mater hospital. Ireland's hospital and public health systems are more sophisticated than those in West Africa and in the event of a confirmed case in Ireland there is unlikely to be a significant outbreak here. 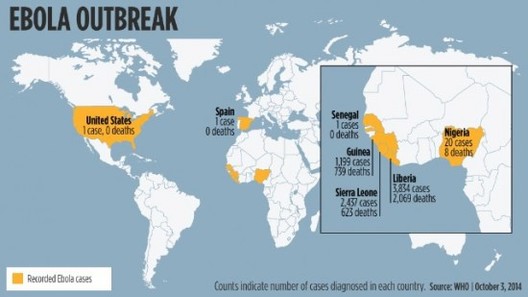 The current Ebola Virus outbreak has infected 8400 people and caused 4100 deaths. The main countries affected are in West Africa - Liberia, Guinea, Sierra Leone. There have also been been cases in Senegal and Nigeria. In the last week there have been isolated cases reported in the USA and Spain. The current outbreak has more confirmed cases and deaths than all previous outbreaks combined.

This outbreak probably started in late 2013 but was not identified as Ebola until March 2014. Previous outbreaks were somewhat self limiting as they occurred primarily in remote villages in Central and West Africa. The 2014 Ebola outbreak is the largest Ebola outbreak in history and the first in West Africa. As it has occurred in urban areas with large populations and transport links the disease has been more difficult to contain.

How is Ebola spread?

What are the symptoms of Ebola?

Is there a treatment for Ebola? 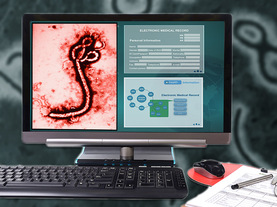 There is no specific treatment for Ebola infection and a patient's recovery depends largely on their own immune response. Medical care can help improve a patient's chances of survival by supporting them e.g. rehydrating the patient with fluids etc. There are currently some treatments and vaccines in development but it is not known if or when these might become available.
People who recover from Ebola infection are protected from Ebola infection for at least 10 years.

Travelling to and from an Ebola affected country?

If you must travel to an area affected by the 2014 Ebola outbreak, protect yourself by doing the following: