Key facts
Rabies is a disease that is transmitted to humans from animals and is caused by a virus. Rabies affects domestic and wild animals, and is spread to people through close contact with infectious material, usually saliva, via bites or scratches.

Symptoms of Rabies
The incubation period (time from exposure to becoming unwell) for rabies is typically 1–3 months, but may vary from less than 1 week to greater than 1 year. The longest incubation period reported was over 20 years! The initial symptoms of rabies are fever and often pain or an unusual or unexplained tingling, pricking or burning sensation at the wound site. As the virus spreads through the central nervous system, progressive, fatal inflammation of the brain and spinal cord develops.

2. Paralytic rabies accounts for about 30% of the total number of human cases. This form of rabies runs a less dramatic and usually longer course than the furious form. The muscles gradually become paralysed, starting at the site of the bite or scratch. A coma slowly  develops, and eventually death occurs.


Transmission of rabies
People are usually infected following a deep bite or scratch by an infected animal. Dogs are the main host and transmitter of rabies. They are the main source of infection in human rabies deaths annually in Asia and Africa.

Bats are the source of most human rabies deaths in the Americas. Bat rabies has also recently emerged as a public health threat in Australia and western Europe. Human deaths following exposure to foxes, raccoons, skunks, jackals, mongooses and other wild carnivore host species are very rare.

Transmission can also occur when infectious material – usually saliva – comes into direct contact with human mucosa or fresh skin wounds. Human-to-human transmission by bite is theoretically possible but has never been confirmed.  Ingestion of raw meat or other tissues from animals infected with rabies is not a source of human infection. 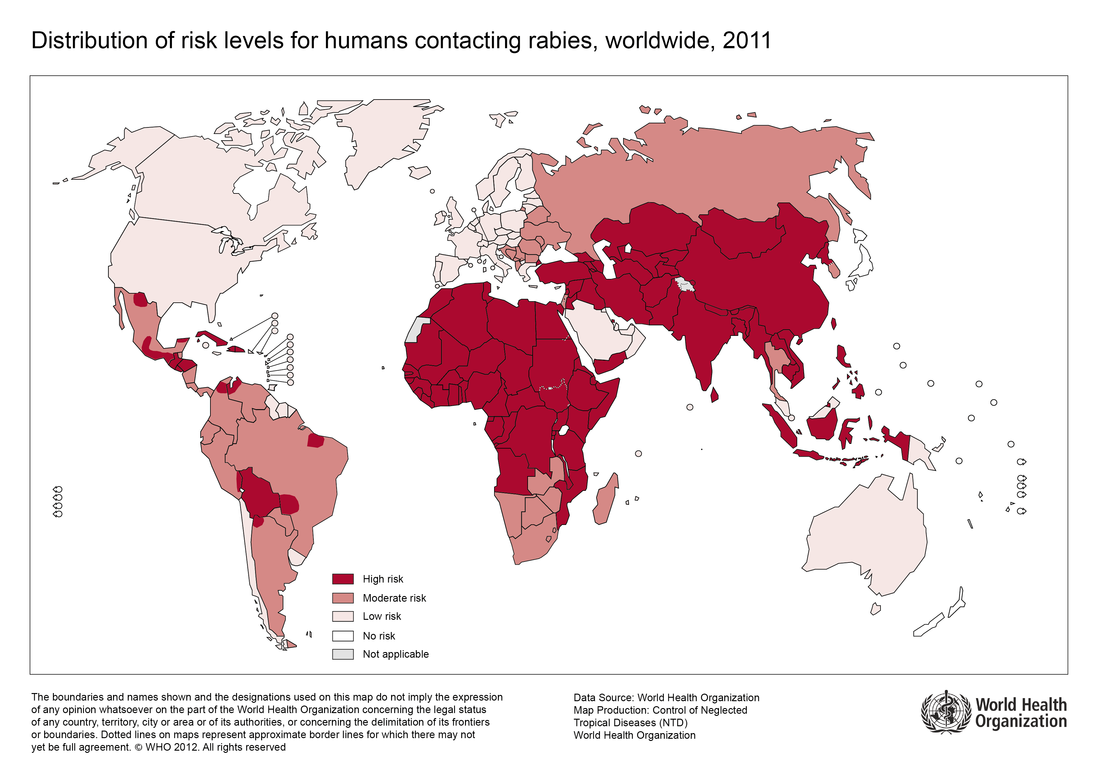 Treatment of a potential rabies exposure:

The patient should attend a doctor for further treatment immediately!

Local treatment of the wound:
Prompt local cleaning of of all bite wounds and scratches that may be contaminated with rabies virus with an antiseptic of alcohol solution is important. This can help to remove the rabies virus at the site of the infection by chemical or physical means and is an effective means of protection but must be followed by Post Exposure Prophylaxis.

Recommended Post Exposure Prophylaxis (Treatment):
The patient should attend a doctor for further treatment immediately.
Further depends on the type of contact with the suspected rabid animal and whether the patient has been vaccinated or not. The treatment required is simpler, cheaper and safer if the patient has had a full course of rabies vaccine prior to exposure.


If you are traveling to an area of the world where rabies is a risk you should discuss the need for Rabies vaccination with one of our doctors.
Make an appointment for Rabies Vaccination